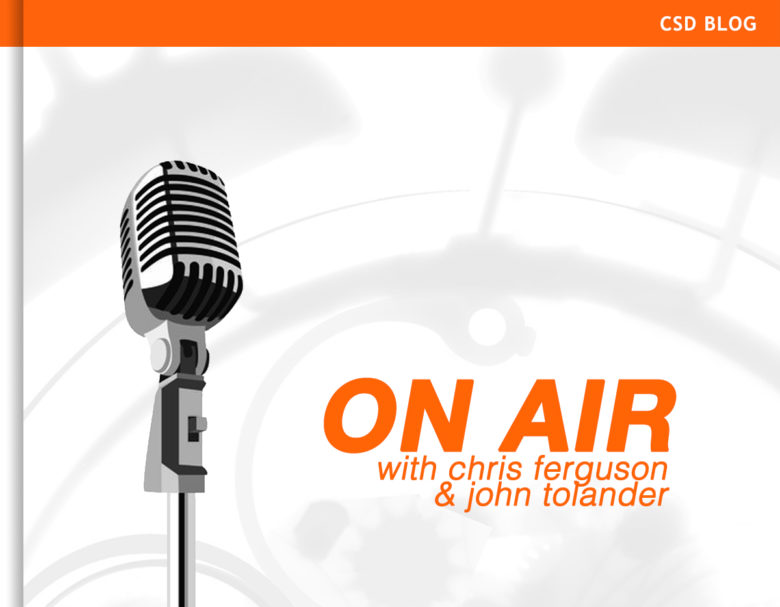 “On Air” is an internally produced series of staff interviews that showcase the talent and personalities of the people who keep Clickspring ticking. Our second installment features a conversation between designer Chris Ferguson and intern John Tolander. Chris joined Clickspring in 2014, is a licensed architect in the State of Texas, and a graduate of The University of Texas at Austin School of Architecture. John is currently enrolled in the School of Architecture at The University of Texas at Austin and will graduate with his Bachelor of Architecture in 2020.

The following banter took place outside our office in Austin near a cliche Airstream food truck selling $12 tacos. John Tolander, B.Arch ’20, The University of Texas at Austin School of Architecture

Chris Ferguson: (pressing record) Okay, so John, now that you’ve embarrassed me by helping me find the voice memo app on my own phone, I feel like I can now rely on you for all my tech advice. And as someone who used to be the millennial in the office occupying that coveted iPhone tech support role, I have to ask: do I make you feel young?

John Tolander: Do you make me feel young?

CF: Do I make you feel young.

JT: Nah, Chris, you don’t make me feel young. You actually make me feel kind of old. I look at you and think, wow, it’s only a few years until I’m doing what you’re doing, getting licensed and all that.

CF: I like that answer. I’m normal and you’re just aging up to my level.

JT: Yeah, I’m going with that. CF: Great. So let’s talk about something more fun than our own mortality. You’re about to spend a semester in Europe on the same study abroad program I did back in 2011. On a scale of 1-10, how stoked are you? And is there anything in particular you’re super excited to see?

JT: And I’m really excited to see the Alhambra in Spain. I hope when we’re there it’s still early enough in the semester that it’s hot and you can really feel the benefit of those micro-climates that the building creates so we get to really experience it how it was supposed to be experienced.

CF: I also want to ask you about Clickspring, since we’re both being paid to talk to each other for this blog. In all seriousness, we’re a different kind of company than a typical architecture firm, but you seemed interested in the work we do right out of the gate. Why’s that? JT: You guys did stand out to me. Something I find fascinating is the integration of technology within projects, and also the design process in general. That’s something I consider to be very important to the profession as we move into the future, and not just in broadcast environments where technology is super prevalent right now, but also in thinking about applications in the home, in restaurants, and in retail. Starting my professional experience at a place that’s an industry leader in that kind of integration just seemed like a great opportunity.

CF: Yeah, and I doubt any of your peers will come back from this summer with an ESPN project in their portfolio, so that’s pretty cool, yeah?

[at this point in the interview John and Chris observe an adorable dog for several minutes and attempt a few humorous tangents, none of which were particularly funny or informative]

CF: So last question, and I think this is how we should end every interview in this series. You’re familiar with “Clickspring Orange” right? CF: Damn! I’m deeply impressed. It’s been years and Steve still doesn’t have it memorized. You’ve already got it down.

CF: So what does that particular shade of orange mean to you? And try to flatter the company as much as you can with your answer.

JT: (after a thoughtful pause) So imagine stepping outside into the Texas heat and feeling the warm glow of the sunlight on your face. For the first five seconds, that’s “Clickspring Orange”. But then also combine that feeling with the taste of licking a Creamsicle off your hand as it melts. It’s this sticky, sweet feeling of summer energy.

CF: Wow. That was…a lot. I thought you were going to mention Donald Trump.

JT: So I have a question for you.

JT: Shouldn’t we be working?

CF: Yeah, we really should be working.

It’s no longer enough for an organization to simply have a well-crafted interior.

Today’s spaces for consumers and corporations transcend traditional interior design by strengthening the role of storytelling within a branded environment. To accomplish this, brands increasingly rely on the integration of cutting-edge technology, allowing stakeholders to engage their surroundings on multiple levels and crafting interactions that lend a heightened sense of meaning and purpose.

Branded environments combine careful messaging and architectural vocabulary to reinforce and elevate a brand’s position in their experiential design.

So, what makes branded environments unique? How can a company benefit from this form of interior design? Here are some of the most common questions we encounter.

Q: Within the realm of the built environment, what is the unique qualifier of a “branded” environment?

A: Branded environments are like any designed environment in that they focus on formal and material design development. But they are also distinguished by participatory, content-rich programs that relevantly communicate one-to-one with target audiences.

The actual design of products, services, events, and environments is inextricably linked to the ability to interpret content and to extend abstract ideas and elements into physical form.

Q: Why have branded environments become an important marketing extension for so many consumer-facing companies?

A: The fractionalization of the consumer audience and their demand for personalization has created a profound and well-documented shift. Brands and marketers want and need new ways to engage their audiences.

Q: What is the value proposition for the client?

A: Effective experiential design programs exponentially extend the consumer audience engagement time when compared with traditional advertising. Experiential programs and environments create a powerful opportunity for brands to immerse, interact with, and affect the behaviors of their audience. When audience engagement time is extended, the potential for both emotional connection and brand loyalty increases. This factor of time correlates directly with an increase in sales of products and services.

To put it simply: a thoughtful branded environment maximizes the time your audience spends with your brand. That investment of attention yields new loyalty, which in turn drives sales.

Q: What types of techniques are employed to create branded environments over traditional interior design?

A: Along with extensive research to help hone and interpret an organization’s story, branded environments often employ deeper integration of technology, environmental graphics, and way-finding design.

Through these techniques, branded environments can help connect a brand with its purpose and culture by creating a tangible expression in a built environment.