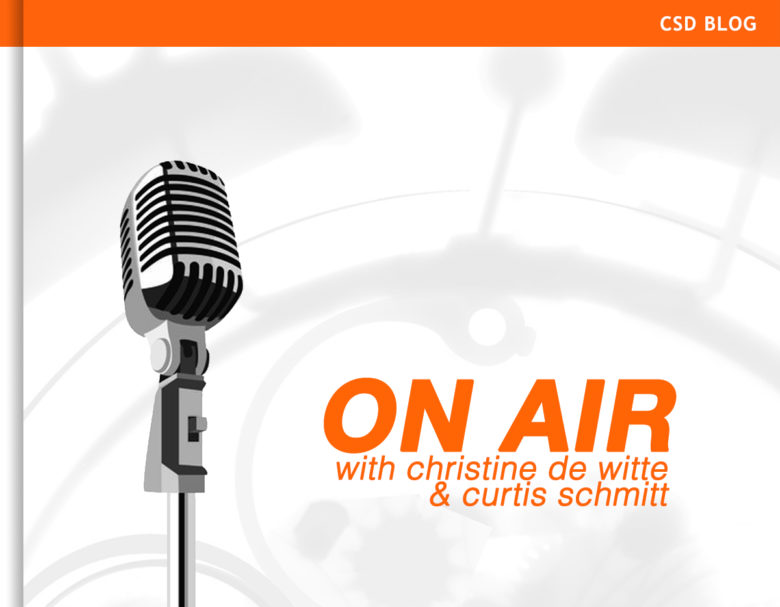 “On Air” is an internally produced series of staff interviews that showcase the talent and personalities of the people who keep Clickspring ticking. Our third installment features a conversation between design director Christine de Witte and senior design director Curtis Schmitt.

The following banter took place via chat log within our New York office.

Curtis Schmitt: We recently discovered we have some things in common.

CS: That about sums it up. Was it common where you were born for babies to not be given middle names?

CdW: Yeah, I think in the Netherlands, or anywhere in Europe, in the 1980s it was much more common not to be given a middle name than it would’ve been in the States, for example.

CS: What do you do for government and web forms that request a middle name or initial?

CdW: I just leave it blank. But a friend in college made up a middle name for me. I think it was Gertrude or something hilarious like that. What do you do with middle initial boxes? 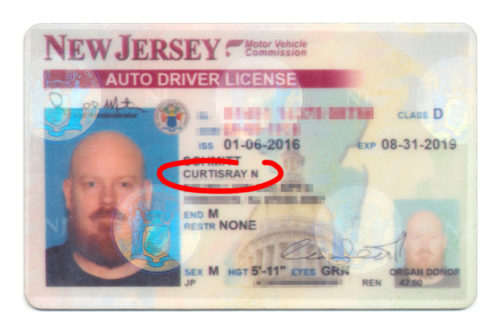 CS: My situation is a little more complicated because I have two first names joined by a hyphen: Curtis-Ray. I generally try to get away with “Curtis R” but the last time I was at the DMV a very sassy woman wrote out my first name as “CURTISRAY” and then assigned me the middle initial “N”.

CdW: Those DMV employees just make up rules. You don’t need an “N”! My license (luckily) doesn’t have one.

CS: Yeah, she told me if I didn’t like it I’d have to legally change my name to remove the hyphen. But if I’m going to the trouble of legally changing my name, I’m doing a whole lot more than just removing a hyphen. So, bikes: how did you get into doing longer rides and eventually into racing?

CdW: I think being Dutch necessitates that you ride a bicycle, so beyond learning the basic skillset at a young age, I was inspired by my parents’ stories of completing the Fietselfstedentocht: a 230-km ride through the eleven original cities of our home province of Friesland. (I was finally able to cross it off the list last year.) But the interest in longer rides built after grad school; the month before I moved to NYC, my best friend and I road-tripped from Austin to Marfa, TX, for the inaugural “Marfa 100” (km). 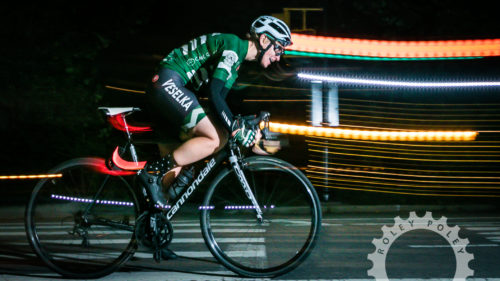 Christine racing (and winning!) in Prospect Park after work, on her birthday.

It took me a bit to understand the possibilities of cycling in NYC, but I found a group of friends and started riding a few centuries or gran fondos per year, and eventually wanted a taste of racing. Once I jumped in, the community of fast and fun people had me instantly hooked! My year-end stats rounded out to 6,200+ miles in 2018.

CS: That works out to 17+ miles per day — that is very impressive!

CdW: Thanks! It’s double what I was doing before racing, but I also know people who hit twice that number. So what’s your current bike count? And plans for the inevitable n+1?

CS: I have three custom bikes, all made here in the U.S., plus the folding bike (not made in the U.S.) you’ve seen me commute in on. Plus one motorcycle. I think my next bicycle could have an electric motor in it.

CdW: So winter’s here and it’s dark at 4pm now. What’s your approach to staying sane until April?

CS: I’m usually pretty depressed by March, honestly, and fantasizing about moving to someplace much warmer. We might adopt a greyhound next month, so that would keep us pretty distracted from the misery of the winter.

CdW: I know you guys have cats… do you test to see if the potential hound will get along with them?

CS: Yeah, so the adoption agencies will cat-test each dog. Precautions must be followed regardless of how cat-compatible the dog is. I want a really sinister looking Nine Inch Nails-style metal muzzle for the dog so that when I’m walking him people will feel intimidated (in reality they’re the farthest thing from a guard dog).

CdW: Haha, and since they’re so thin, you’ll have to get a matching sweater and boots, too.

CS: My wife is very excited about making all sorts of custom clothing and booties for the greyhound.

CdW: She can expand her shoe line!

CS: She would love that. Alright, we’ve covered most of the things we have in common that we love. One we haven’t yet is: rectilinear geometry. Christine, why do you hate curves so much?

CdW: Haha, well… that’s a difficult one to pin down. I really enjoy working within systems with well-defined rules or parameters, which rectilinear geometries just readily fall into. Many curved forms are mathematically defined as well, so my argument doesn’t necessarily exclude them. But with things like b-splines and, shall we say, “organic” forms I feel like there’s such a propensity to draw whatever you want… there’s no system guiding your decisions.

CS: Right. There’s no rigorous logic in the “free” forms. So would it be fair to say that Frank Gehry is not your favorite architect?

CdW: So fair. And it’s well-known that I’m no fan of Zaha, either.

CS: Who is your favorite architect?

CdW: I have to say that with the variety architecture blogs providing glimpses of inspirational work by architects or small firms I’m not necessarily even aware of, I don’t think I can pinpoint a real “favorite” … but I do consistently love the thoughtful nature of Tod Williams Billie Tsien projects.

CS: Not seeing any curves in their portfolio.

CdW: There might be a few, but yes, very restricted. How about you? 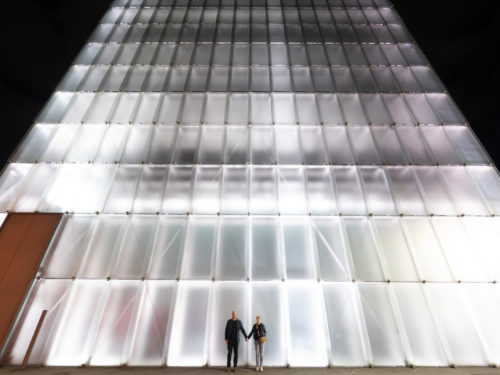 CdW: Have you visited any Zumthor works in person?

CS: Yes, this past summer, Becca and I visited Kunsthaus Bergenz. It was easily one of the best moments of my life. The guy designed it in the 80s, it’s just mind-boggling. I came across photos and drawings of this building in 2003 in school when my mentor suggested I look him up. So I’d built it up over the last fifteen years in my mind as this perfect specimen of architecture that nothing else measures up to, and it still exceeded my expectations.

CS: I didn’t want to leave, Becca had to drag me out of there. Bregenz is also a sweet little city too, in what is one of my favorite countries. I’d move there tomorrow. I don’t feel that way about many places.

CS: I would! Are there any places you’d leave NYC for?

CdW: Well, I just reached my 8-yr NYC-versary and am not leaving anytime soon, but yeah, I’d consider it at some point. Haven’t found the spot yet, though. I really loved the beauty of northern CA when I visited, and Seattle as well, but the west coast isn’t pulling me in a more permanent way just yet.

CS: How did you find your way to Clickspring Design?

CdW: I graduated at the end of 2008, when architecture jobs were pretty hard to find, so I went home to work for my dad while continuing the search. I had stayed in contact with a professor who is friends with Steve Dvorak and heard he might be looking for some drafting help. Steve’s phone call literally came while I was driving a tractor, loading round bales onto a trailer. I drove back to Austin that weekend and have been kept busy ever since!

CdW: Your story isn’t quite the traditional route, either, right? How did you end up in this line of work?

CS: It’s not, and it’s too long for this format. For anyone truly interested, I refer them to my bio.  OK, if you weren’t doing this, what do you think you’d be doing for a living? 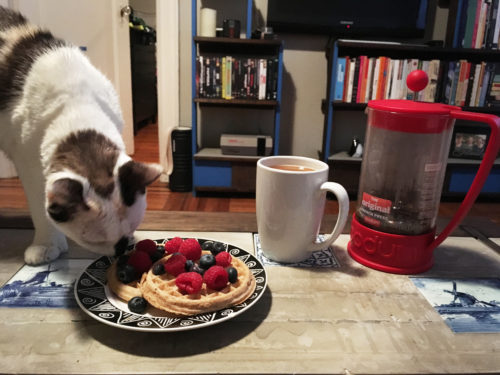 Christine did not make these toaster waffles, but she did cast this coffee table on her tiny fire escape.

CdW: Probably running a waffle shop with my youngest sister. It’s that thing we bring up when we’re exhausted for one reason or another and say “let’s quit our jobs and open a waffle shop.”

CdW: Yes, waffles are so delicious and versatile. We’d have a pretty varied offering and business would surely boom.

CdW: Veselka makes a good waffle! And I’m not just saying that because I race for them. OK, but srsly now it’s 3pm and I forgot to get lunch. Gotta step out.