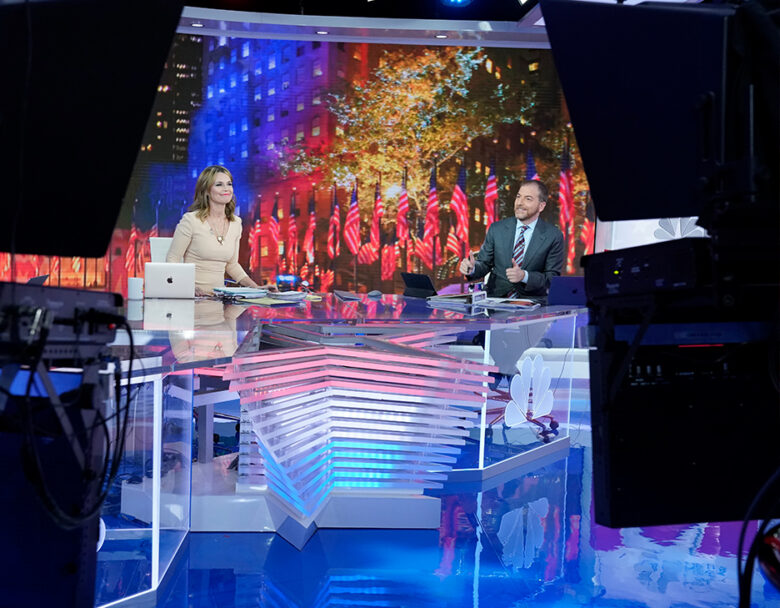 2020 Election Coverage With Social Distancing on NBC and MSNBC

A historic moment in history; the nation facing a global pandemic in the midst of an election year. The 2020 presidential election called for studio modifications both to revitalize the narrative storytelling of this year’s presidential race as well as to address each space for proper social distancing.

Thinking critically on studio space 3A, in which a refurbished socially distant desk was first utilized for the 2020 convention coverage, the goal became to implement transformative changes that adapted the space into an election-centered broadcast environment. The studio space is to be utilized by Rachel Maddow, Joy Reid and Nicole Wallace on election night. transporting the viewer into the up to the minute, statistic rich would of election coverage. Along with lifting the space into an election narrative, came the need to reimagine the adjoining studio 3 newsroom in order to visually extend the election center behind stats guru Steve Kornacki. Large ceiling lanterns positioned from the original Clickspring studio design, are now counter posed in red and blue with a large vertical LED screen, clad with the same detailing of MSNBC’s industrial election graphics package, hangs in between the two lantern sections. Downstage of this, the old newsroom riser has been reimagined as a visual delivery ‘platter’ for MSNBC’s augmented reality election graphics. The structured space was fabricated with smart architectural developments that framed key LED components. Lead Clickspring designers utilized strategic placement of graphic AR information panels that have a natural relationship with both the scenic that the graphics derive from as well as the space surrounding. 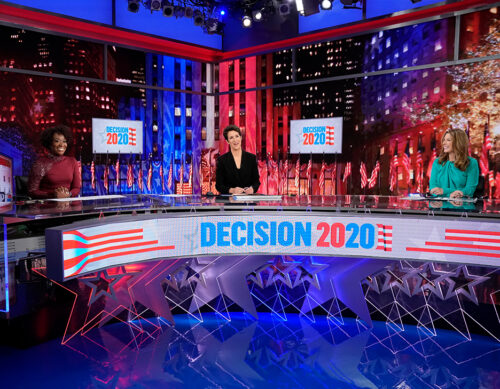 Staged at the West end of Studio 3, typically used by NBC Nightly News with Lester Holt, MSNBC asked to modify a section of 3A West that would be a home base for Brian Williams on election night. Efforts centered around elevating out touring NBC debates-cycle desk to become an appropriate home base for Brian Williams. Used heavily throughout MSNBC election coverage, this space both re-engages and re-invents the use of star shapes within the anchor desk. The curvilinear desk is stationed front and center featuring double-sided star shaped lensed lightboxes and updated platform extension. Taking NBC’s 2020 ‘bug’ and dimensionalizing it helps make Williams’ home base larger and more impactful, while providing a beautiful foreground detail for the camera to bump from. To match the scenic elements, significant changes to the material palette in the spaces were made, transitioning from the more traditional Walnut to a clean, gloss white. Logo elements are brought into usage on both the edges of the desk highlighting the 2020 election narrative as well as bringing the iconic NBC peacock into play. 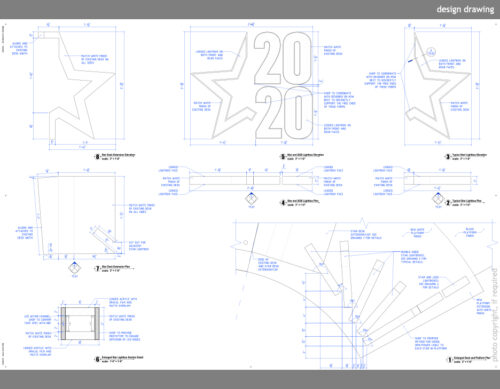 The final portion of this election revamp scope supported  NBC News’ Election coverage in Studio 1A; typically used for the Today Show but now a home from which Lester Holt, Savannah Guthrie, Chuck Todd and Andrea Mitchell will call the election. Through simple color and graphic choices, the studio design was thoroughly ‘electionized’ for the coverage, Once again our existing Election desk design had to be modified to ensure that each anchor was spaced 6 feet apart for  proper social distancing. The new support structure of the larger top was designed to be as light and transparent as possible, with flanking edge-lit peacocks providing visual accents, so that the twisting stacked star of the original desk design remained the hero visually. Finally, a brand new, sweeping wall form on the 49th st side of the studio provided a visual bridge from the anchor desk to Chuck’s Stand-up location at the large 86” mobile touchscreen. Cameras are strategically hidden inside this wall to enable cleaner shooting. 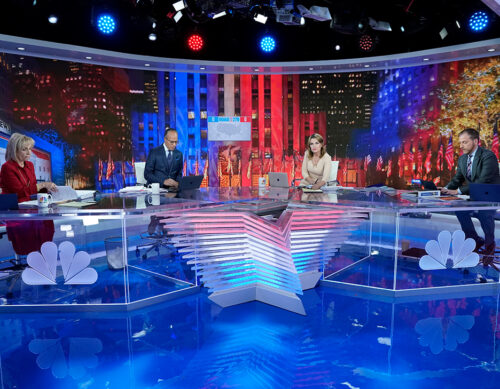 Among the many modifications and updates to all three spaces, the designs maintain an overall scenic integrity to the existing architecture while highlighting the election theme. 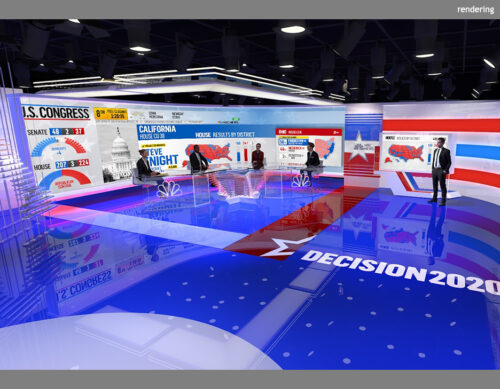 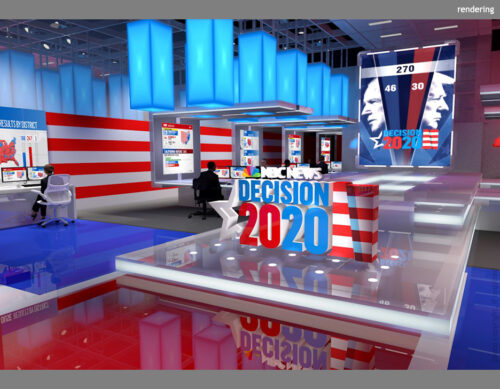 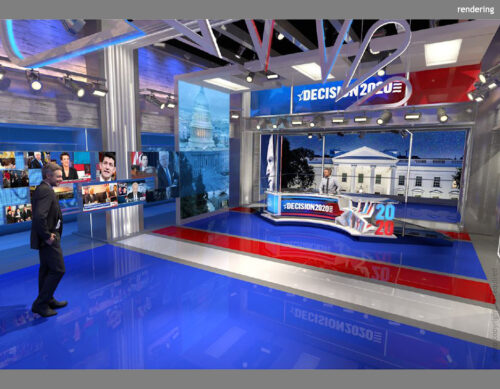 Studio 1A built by Black Walnut

Studio 3A and 3AW built by Mystic Scenic