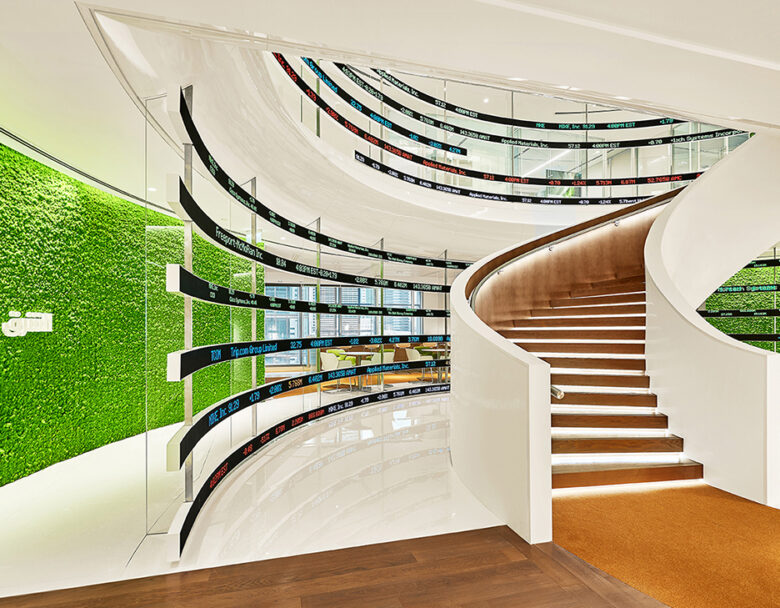 The notion of transparency is critical to Asharq’s editorial mission, and communicating that ideal both aesthetically and functionally within the built environment was important to the success of the project. Unifying four separated levels of the existing building with a dramatic and sculptural central staircase was an early design decision that informed the remaining organization of the project.

Ribbons of curved LED bands are mounted on glass fins around the perimeter of the atrium, gradually decreasing in density from top to bottom. Global stock market ticker data scrolls continuously within the installation’s displays, but any image or color can be displayed, as well.

Also critical to the idea of transparency is the unique organization of the two main studios and their adjacent newsrooms and control rooms. Avoiding the limits of traditional “black box” studios, Clickspring opened the studios to their newsrooms while integrating the control rooms into the on-air look, as well. These decisions required careful attention to acoustic and editorial workflows, but serve to visually reinforce the ideals of openness and accessibility both internally and on-air.

Extensive use of custom, high-performing acoustically rated glass wall assemblies can be found throughout the project, bathing the interior spaces with light while also maintaining visual sight-lines between teams. To create visual simplicity, the two glass channels that hold each pane are recessed into the raised sub-floor and dropped ceiling, creating a full hight, seamless connection.Highly reflective, white surface material finishes are employed across the project to help bounce light into interior rooms. In this way, light, space, and visual accessibility are distributed democratically throughout the building program, emphasizing that even in ancillary or production related spaces there is a commitment to openness, comfort, and equal access at Asharq News.

Modern broadcast facilities are some of the most technologically advanced spaces in the world, yet the scale and quality of Asharq News’s studio build-out establishes a new precedent for what can be accomplished in the broadcast industry at large. Vast arrays of fine pixel-pitch LED tile span the full length of two sides of the Level 6 News Studio, allowing for a mutable cityscape vista, regardless of weather conditions. The main anchor desk also can track in 270 degrees, supported by a sub-floor Igus cable management system. Complimented by eight additional fully automated and radially tracking ceiling mounted displays, the studio facilitates an unprecedented level of flexibility for program directors. A cylindrical LED column wrap also frames shots into or from the open newsroom adjacent to the studio.

A similar approach was taken within the other major studio on Level 6, which is dedicated to business news coverage. Unique to this studio is a recessed, circular floor mounted LED display, which can support augmented reality graphics that blend the boundary between physical and virtual.

The studio’s lighting system is also noteworthy, as it represents the first use of the ETC DataTrack Backbone outside of the United States. This product allowed Clickspring to integrate lighting positions seamlessly into areas which would otherwise require a traditional – and less visually appealing – pipe grid, cabling, and sporadically placed junction boxes. Through the alignment of ceiling conditions in both the studio and newsroom environments, producers are given more on-air production opportunities throughout the entirety of the facility.