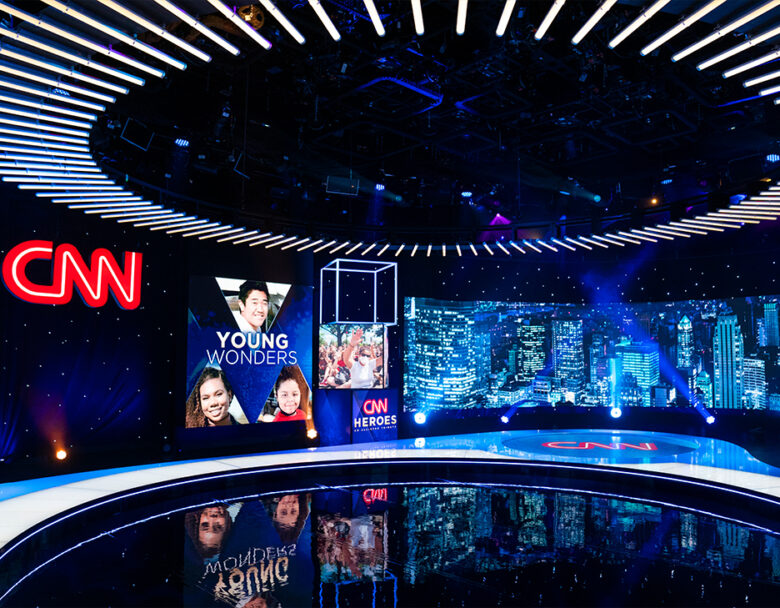 The annual CNN Heroes program is known for celebrating hopeful stories and triumphant humans across the globe. A favorite recurring project for us here at Clickspring design, we look forward to seeing the new faces each year who help this world become a better place.

The broadcast event has historically been held in the American Museum of Natural History’s Milstein Hall of Ocean Life, with the star-studded live audience celebrating the important work of the nominees under the famous life-sized model Blue Whale. As the risks of an audience event in 2020 grew due to the ongoing threat of the Covid-19 virus, the CNN team was forced to reimagine the format of the event while maintaining the splendor and hope of the Heroes annual broadcast.

Thankfully, CNN has Studio 19X at Hudson Yards. Designed by Clickspring in 2018, the space’s inherent flexible nature was the perfect venue to house a reimagined Heroes 2020 event.  Once the location was identified the goal became to create a design that was fresh and accommodating to the necessary format changes while keeping the visual hallmarks of the traditional Heroes program. Without the ability to have live studio guests video became the primary means to tell this year’s incredible stories, via both pre-recorded content and remote live interviews. To support this, Clickspring configured the studio’s existing tracking LED displays within the studio to create multiple presentation areas, anchoring each with the traditional stacked Heroes cubes, though upgraded for 2020 with LED faces.

An iconic feature of the CNN Heroes production for the past 6 years is the three-dimensional stacked graphic cubes, highlighting the faces and work of the people being honored. A seasoned classic, these cubes traditionally have internal lighting and graphic still images. Working with the need for remote connection and scenic variability of interview screens, three new cube types were introduced to this year’s broadcast design. First, multiple of the aforementioned ‘video cubes’ were built to support LED video screens instead of the usual still graphics. Then ‘skeleton cubes’, made of internally lit frames, were included in the sculptural cube stacks to added visual diversity to the design. Lastly, ‘wild cubes’ mirrored the aesthetic of ‘skeleton cubes’, though design slightly smaller, battery powered, and on wheels to allow them to be used as foreground throughout the shoot. Integrating these newly imagined elements alongside the programmatic staple creates a visual reference to the broadcasts’ past, while formally declaring that the event is in a new home. Finally, completing the carryover from the look central to the Natural History Museum banquet, a LED star curtain drapes the backdrop of Studio 19x maintaining the broadcast integrity while giving the space a twist.

The various presentation areas were tied together by a custom circular walkable lightbox runway, which was integrated with the studio’s existing LED platform. This circular perimeter platform, mirrored overhead by a custom lighting feature comprised of 100 independent lighting instruments, unified the space into one immersive 360 environment. Completing the look, the studio was wrapped in the star drop familiar to the Museum of Natural History broadcast. 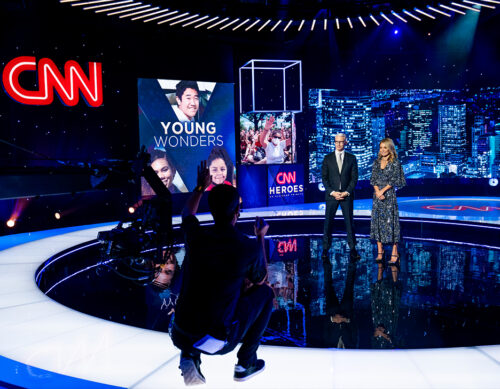 We are so honored to contribute to a program celebrating the outstanding, selfless, and inspiring people in this world. The challenge of reimagining a program focused on honoring people and sharing their stories, without being able to have people present, presented a creative opportunity that we had yet to see. To this year’s heroes: we congratulate you and wish you nothing but continued success. While we are proud of the work completed this year within studio 19x, we look forward to celebrating in person in 2021.